The Frilly Baby: Our 5 Month Update

What a busy life this is! And what a crazy couple of weeks this has been. I have so many stories to tell.

First, all the good stuff. 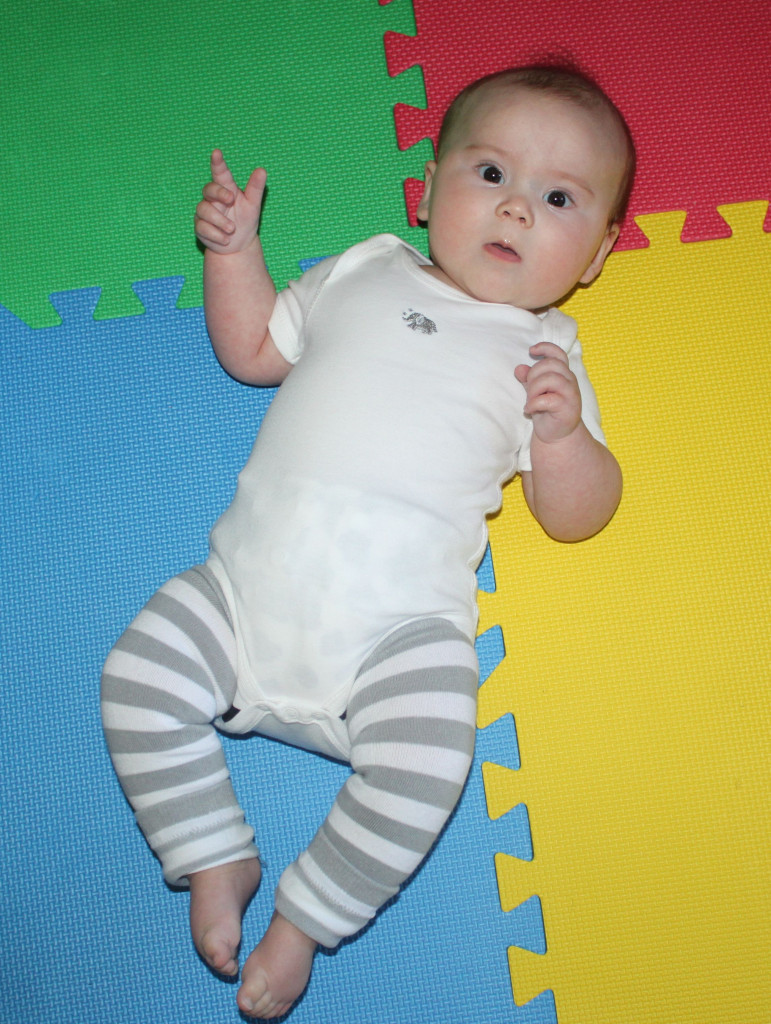 Our little Miss Hadley is growing in leaps and bounds! While it seems like it was just yesterday that we brought this tiny little girl home, Hadley’s now five months old already. At our last check, she was almost double her birth weight, weighing in at 16 lbs! Yay, girlie!

My girl’s smiling and giggling up a storm now, and I am loving every second of it. She squeals at us and tries to talk to us all the time. It’s adorable. I have yet to catch it on video, and I can’t wait until I do. She’s also getting stronger and stronger all the time. I can stand her up on my lap, and tummy time is no longer a struggle. She’s even starting to move around a bit on her own, even if it is just in circles so far. It’s amazing to watch all of this happening so quickly.

Now, the not so great stuff.

About 3 weeks ago, I decided that it would be in my best interest to start trying Hadley with a bit of formula. Having been exclusively breastfeeding these past 5 months, I thought we could start thinking of weaning her a bit and giving mama a little break every once in a while. After hearing great things about the Kirkland brand baby formula, that’s what we bought and decided to try.

We fed Hadley a bit of formula once a day, every day. While she wasn’t really crazy about it, and she would only try an ounce or two at a time, it was going relatively well, we thought. We did this for eight days.

Last Sunday was the eighth day. I was at my parents’ house, with the idea of spending the night. Hadley’s first night away from home. When it was near her bed time, I started warming a bit of formula for her. She took a couple of ounces of it, then was done with it. I rocked her a bit, and she went to sleep.

About ten minutes after putting her down, she started to stir. This was a bit unusual, but she was in a new place to sleep after all, so I rocked her for a few more minutes and she drifted back off. Again, ten minutes later, she was stirring. This time my mom and I both went down to see what was up.

When we checked on Hadley the second time, she was in quite a state. She had vomited on her left side and her pyjamas were quite wet, as was the blanket she’d been laying on. We immediately picked her up and changed her. I also thought I should nurse her again, considering how much she’d vomited. As I was nursing her, I noticed that the left side of her head was very red, and was broken out in hives.

The hives really freaked me out. Our nephew is anaphylactic to a couple of different foods, so I didn’t want to take any chances. We called the ambulance. The ambulance arrived within about 8 minutes of us placing the call. The paramedics did a check on Hadley, checking for any breathing issues as well as checking her heart rate. She wasn’t having any respiratory issues at all, but they asked if we wanted to take a trip to the hospital, just for reassurance. We did.

When we arrived at the hospital, Hadley was assessed by a nurse and we were told to wait. We waited for a little while before the nurse came back out with some Benadryl for her. Daddy then took her and walked the hall with her until she fell asleep. We had been waiting for at least an hour when the same nurse came back out and told us it would still probably be a while before a doctor could see us and she suggested we go home since Hadley was comfortable and the hives seem to have gone away. So we went home. She was fine the rest of the night, and has been just fine since. Thank goodness. It was a very scary evening, but luckily everything turned out to be OK.

After speaking to my family doctor about the hives that Hadley experienced, she tells me that she isn’t convinced that she has a dairy allergy, as I’d feared. She thinks the hives may have been caused by the vomit and that maybe the Kirkland brand doesn’t agree with her. She wants me to try Hadley on formula again in a couple of weeks, but maybe a different brand. We’ll see. The fact that she isn’t immediately convinced that it’s a milk allergy is a silver lining at least.

That’s all of the update I’ve got for now.

This entry was posted in all recipes. Bookmark the permalink.

One response to “The Frilly Baby: Our 5 Month Update”